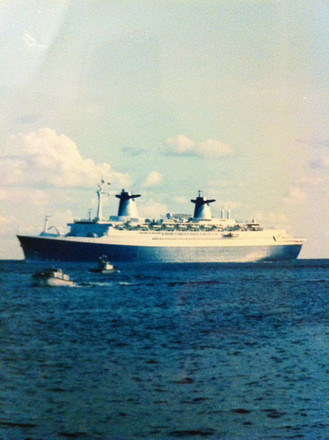 Blue Pig photography's founders have been professional photographers for over twenty five years starting on Cruise ships (the ultimate in event photography jobs!) at the tender ages of 19 and 20. They both worked together on what was the world’s biggest cruise ship the SS Norway and were part of the record breaking team that took over $60,000 in one week!

The SS Norway had a reputation as being a very tough ship to work on, in fact many photographers fled the company rather than join. "The Blue Pig" was her nickname and our company was named thus in homage to friendships forged in photographic chemicals and eighteen hour working days on-board.

The old faded photograph above was taken then, considering the quality control limitations of chemistry on a moving ship it has lasted well!

For the last seven years The Blue Pig has been helping event organisers make more of their day;

Car clubs, Dance and theatrical shows, proms, parties, charity events, sponsored marathons, and graduations are just some of the things we have covered along with head shots and even pet shoots.

We are organised, punctual and yet have a laid back style. We add to your event without trying to take over proceedings.